As I finally headed deeper into Afghanistan in the autumn of 1987, I was feeling really good for the first time in several weeks. Courtesy of two Western doctors and some magnificent locals in Nuristan, I was finally recovered from food poisoning first caught in the act of eating dinner in Chitral, Pakistan.

Without the gentle, thoughtful people of Nuristan, I would never made it out of that region.

Pumped with antibiotics, I was feeling stronger every day and was in high spirits. A couple of weeks of disappointment verging on anger were now behind me. My former horseman and my former guide, the two scoundrels who deserted me along the trail were easily put out of my mind as irrelevant history.

I was now in the hands of one chap, a vivacious, friendly, exceedingly gentle, and reputedly honest young man named Rahman Baig. And I could not have been more happy.

As dawn broke, the view from inside the stone teahouse, a chaikhana, was splendid. It promised a magnificent vista, the heights we were about to climb. Outside the door, even as he lugged a huge sack of hay to strap on the horse, Rahman Baig was cheerful and happy.

In short, Rahman Baig (and people always used both his names in any reference) was quite simply magnificent company. Aged 26, he spoke some English that he had taught himself while in a hospital for more than a year in Pakistan. He also tried to teach me his language, Dari. And I would carefully pronounce the words and syllables to match his enunciation. Occasionally, I’d see listeners laughing out loud, but I put it down to my own incompetence as a linguist.

Traveling and occasionally even blazing the trail, we had Rahman Baig’s horse and the two donkeys that I had purchased in Nuristan before we set out. The donkeys were as stubborn and uncooperative as anyone could imagine. Both of them had a regular habit of simply stopping on the trail and looking at you, as if to say, “That’s me for the day.”

When it was my turn to drive them forward, they seemed to immediately recognize a newcomer — a neophyte who could no more get them to the next village than he could have carried both of them on his shoulders to Kabul.

In his gentle and gracious way, Rahman Baig would take over and somehow keep his own horse and both the donkeys moving.

As we headed forward into the mountains, we conversed as much as we could. I got the clear impression that he was happy to work with me — as much for the exposure to the English language — as for the money I promised.

There were times when he was distracted and called out above the wind whistling up the mountain and half his sentences would be lost. On one occasion, he took the greater part of the climb to explain the question that was bugging him — what is the English translation for the Islamic prayer, “Insh’Allah.” At the top of the mountain, I told him, “We would say, ‘If God is willing.’”

The answer tickled him greatly. I swear Rahman Baig virtually danced down the other side of the mountain behind our beasts of burden, periodically calling aloud, “If God is willing.”

Bit by bit along the way, he told me his family and his recent history.

The Soviet Union invasion of Afghanistan had been brutal to him, the worst time coming three  years earlier. It was then that a Red Army assault on the Panjshir Valley came from both the land and the air. As gunship helicopters swooped down, firing rockets into one village, Rahman Baig grabbed his then 4-year-old sister and ran with her. As he protected her, he was struck by an explosion of shrapnel and bullets. The little girl was buried under a collapsing wall. Both survived — but they were among the few: Rahman Baig’s nine brothers, his father and two uncles were all killed that day.

Today, Rahman Baig’s face and body still bear the scars from what he suffered. As he reflects back on what happened, he says simply, “God understands. I do not.” And his mind drifts with the memories.

Somehow, he and his sister made it out to Pakistan where they underwent treatment at a Red Cross hospital. It was a year and a half before he could travel again.

As we pressed forward, Rahman Baig and I had the good sense to avoid the worst of the mountain passes, Simm Khotel, going around it in a longer, circuitous route. As winter was approaching, any mountain above the snowline was increasingly dangerous.

Eventually, we came to the village of Kantiwah. As we carried our bags from the horses into the chaikhana, the largest I’d seen so far in Afghanistan, I suggested that perhaps we could sell the donkeys here and purchase a horse to replace them. Rahman Baig thought this was a great idea and set about investigating the possibility as I settled down for a nap on the dirt floor.

It was, it turned out, an excellent idea — for many reasons.

An early morning view as Rahman Baig (at right) and I prepare for a new day’s travel.

My newfound friend in 1987 in Afghanistan, Rahman Baig.

Our travels continue in Afghanistan with two stubborn donkeys on a treacherous trail. 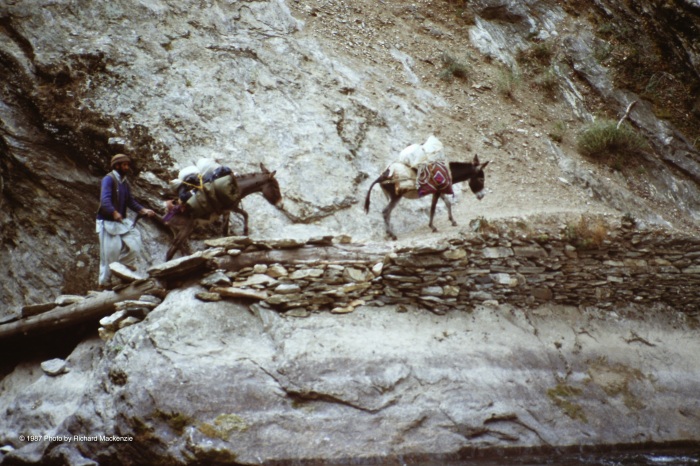 The further we went, our donkeys proved only Rahman Baig could keep them moving. 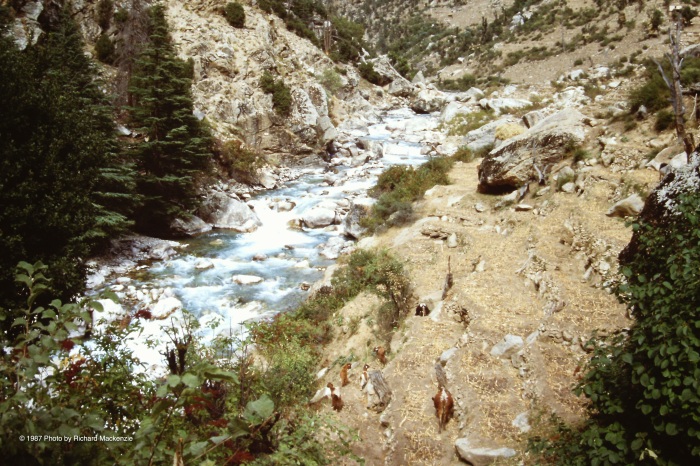 Below us, a raging river where no wrong step was allowed. 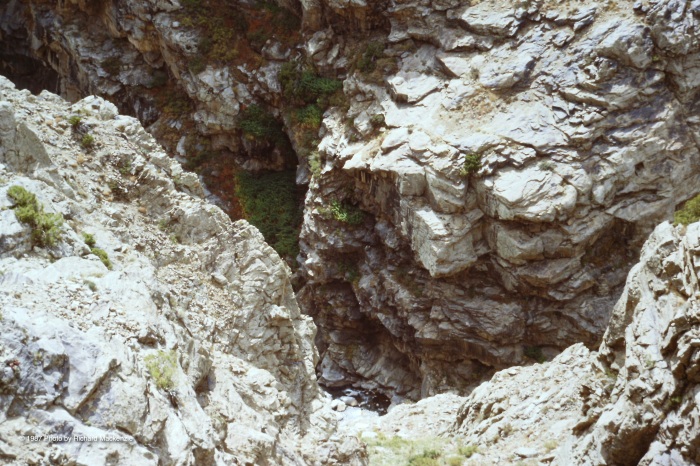 Any false step on many a narrow path could have led to disaster.

Our fellow travelers on the trail carried vital loads for the mujahideen. 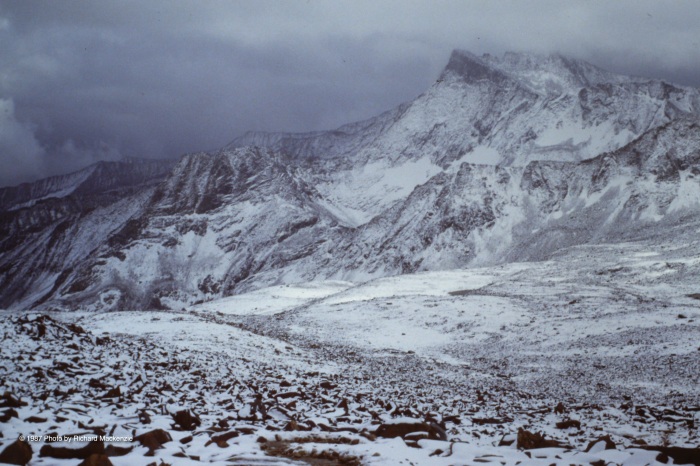 Above us, the snow line that awaited where every step was dangerous.

Atop one mountain pass, even Rahman Baig pauses to catch his breath.

3 thoughts on “A GREAT NEW FRIEND”