It had been a long journey into the Hindu Kush mountains, starting in the Northwest of Pakistan in the summer of 1987. We began by secretly crossing the border into Afghanistan, trekking through Nuristan and finally making it over half a dozen 10,000-foot mountains to the Panjshir Valley. There, I discovered that the man I had come to interview, Ahmad Shah Massoud, wasn’t home. He was somewhere up north, another mountain pass or two away. No problem, they said, I could make it there in a day or so. I quickly learned time was a relative matter in Afghanistan, where days turned into weeks, and weeks into months.

I eventually got to my new destination and settled down in a small house on the edge of a river, deep in the mountains. I shared a small room day and night with a dozen or so mujahideen resistance fighters. They were gathered to fight the Soviet Union’s invasion and the Communist regime that ruled their country.

Late one night, my roommates said we had to leave immediately and we made a midnight march deeper into the mountains, stopping in the pre-dawn hours at what might optimistically be called a village. In the days to come, I never counted more than three houses there. Someone said the name of the place was Pinuee. We slept in what could be called a barn.

I was about to doze off a night or so later when there was hustle and bustle outside the door. A lone man entered and the others in the room jumped to their feet. It was then I was introduced to Ahmad Shah Massoud. He smiled and I got the impression he was welcoming me. Despite his charm and obvious charisma, we had a problem. I spoke no Dari other than the words I had learned from my horseman along the way. And Massoud spoke virtually no English.

Not to worry, one mujahid told me the next morning. One of Massoud’s confidantes was on his way and he spoke good English. He would be my tarjamon, my translator.

The young man did arrive and came to my room to say hello. He was softly spoken with a firm but gentle handshake. He asked about my health on the journey and inquired if I needed anything. I told him my main need was to interview Massoud.

That was not a problem, the young man said. But, he added, I would need to write down all my questions and give them to him in advance.

A cynical journalist at heart, I didn’t like the sound of this. Back in America, that was the type of thing that duplicitous American politicians requested. And I protested.

Seeing my discomfort at what he was asking, my newfound friend, my tarjamon, assured me that he just wanted to be careful that he got my questions correct.

I taped the interview and, on reflection, it did not seem that Massoud had previewed or rehearsed his answers.

It wasn’t until much later that I understood what had transpired, that the translator had taken my list of questions and a dictionary with him — and sat up half the next night, working on my questions, to make certain that he got all the words correct.

Simply, the young man — who was known then, and now, as Dr. Abdullah — did not yet truly speak that much English. It would be a decade or so before he learned, before he would travel the world as Afghanistan’s Foreign Minister or later be a candidate for President. 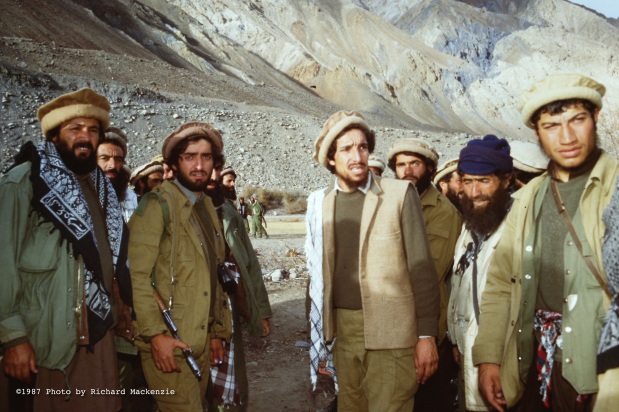 A lone mujahid stops for prayer in 1987 during a day’s march down the Kochka River in Northern Afghanistan.

Almost three decades ago, no one would have immediately recognized this young man as a Presidential contender.